“Make women’s lives visible in data.” “Our voices, lives and stories count.” “No gender equality, without gender data.” These were the messages from diverse feminists and gender data advocates at our panel discussion ‘A data L.I.F.T. for gender equality’.

With the Generation Equality Forum in Paris kicking off on June 30, Equality Insights, Data2X, Equal Measures 2030 and GROOTS Kenya with participants from around the world came together to champion gender data as critical foundation for achieving gender equality.

The demands of gender data advocates are loud and clear – gender data is a must. Inclusive and intersectional data is vital to speed up progress on gender equality, prevent gender-based violence, and eradicate inequalities. 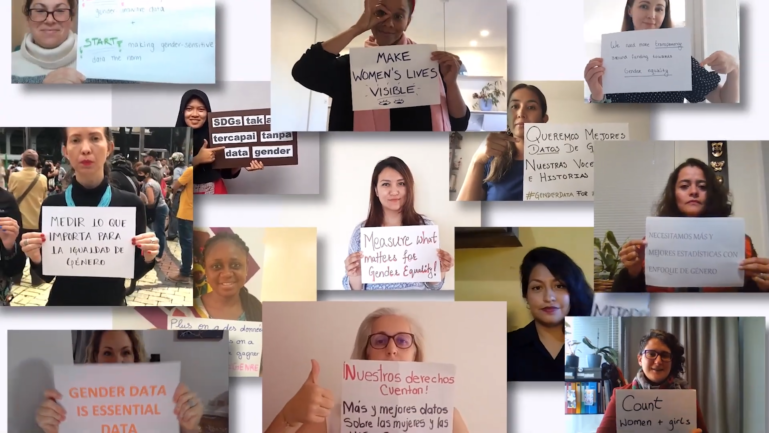 The video embodies the feminist spirit of Generation Equality to bring people together – across different countries and regions, ethnicities and cultures, genders and ages, power and hierarchy, to co-create, collaborate and take action to achieve gender equality.

At the current rate of change, we are still 135 years away from closing the gender gap. As a global community, we need to LIFT our game. This is what gender data leaders had to say about why gender data is vital, what they are doing themselves to drive action and the commitments they seek from others through the Generation Equality process to: Leverage existing data. Increase data and funding. Fuel political will. Transform the enabling environment.

Emily Courey Pryor, Executive Director of Data2X, emphasised that gender data has the immense potential to accelerate gender equality, but it does nothing if it’s sitting on the shelf!

Getting others to use existing gender data is an urgent priority to inform policy, programming and drive action through the Generation Equality Forum processes. Emily spoke about the potential for big data and digital data “to provide more real time information and nuance to the complexities of the lives of all people”. While there are promises and pitfalls,

“It is important for us all as a community to think about how this [big data and digital data] can be helpful as well as sound the alarm bells when it is not helpful.”

Data2X is calling on individuals and organisations across all sectors to make bold commitments to gender data – from collecting and disaggregating data, to financing gender data gaps, to using existing gender data to inform their decision-making. Data2X has committed to track all gender data commitments made at the Generation Equality Forum process, to ensure the data we need to monitor progress and meet our goals are actually delivered. 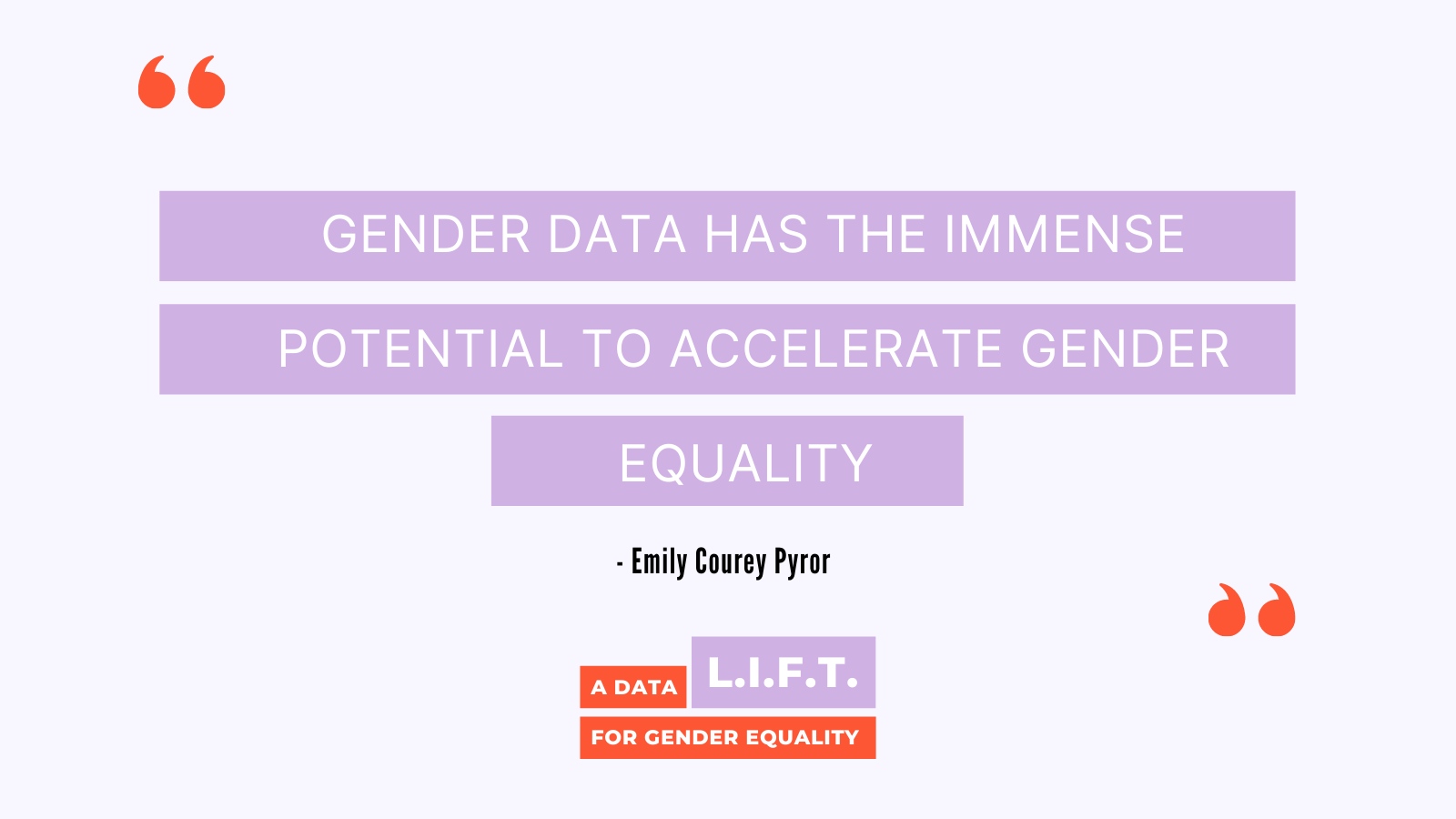 As the Executive Director of  GROOTS Kenya, a grassroots movement building organization, comprising over 3,500 women–led grassroots groups, Fridah Githuku spoke about the importance of community-led, evidence-driven advocacy, and the critical role data plays to shift power, challenge bias and stereotypes, and develop better policies and decisions when it is put in the hands of women:

“Resourcing grassroots women with data empowers them with evidence and puts them at the same level as policymakers—as stakeholders.”

Working to get women into decision-making spaces is one thing, but when they “arrive fully equipped with evidence and the information to influence policy” this shifts power. GROOTS Kenya’s role is finding, synthesising, simplifying and visualising data and then working with grassroots women to co-create advocacy messages – a powerful an inclusive way to leverage existing data to affect change. They have developed a simplified gender data dashboard for Kenya that advocates can access on their phone. Decisions regarding data to prioritise and visualise are made collaboratively and the dashboard includes data that is particularly relevant for women in rural areas and in informal settlements. Data is capital that enables grassroots women to be the most effective advocates for change at a community or local-government level, combining their experience with evidence. 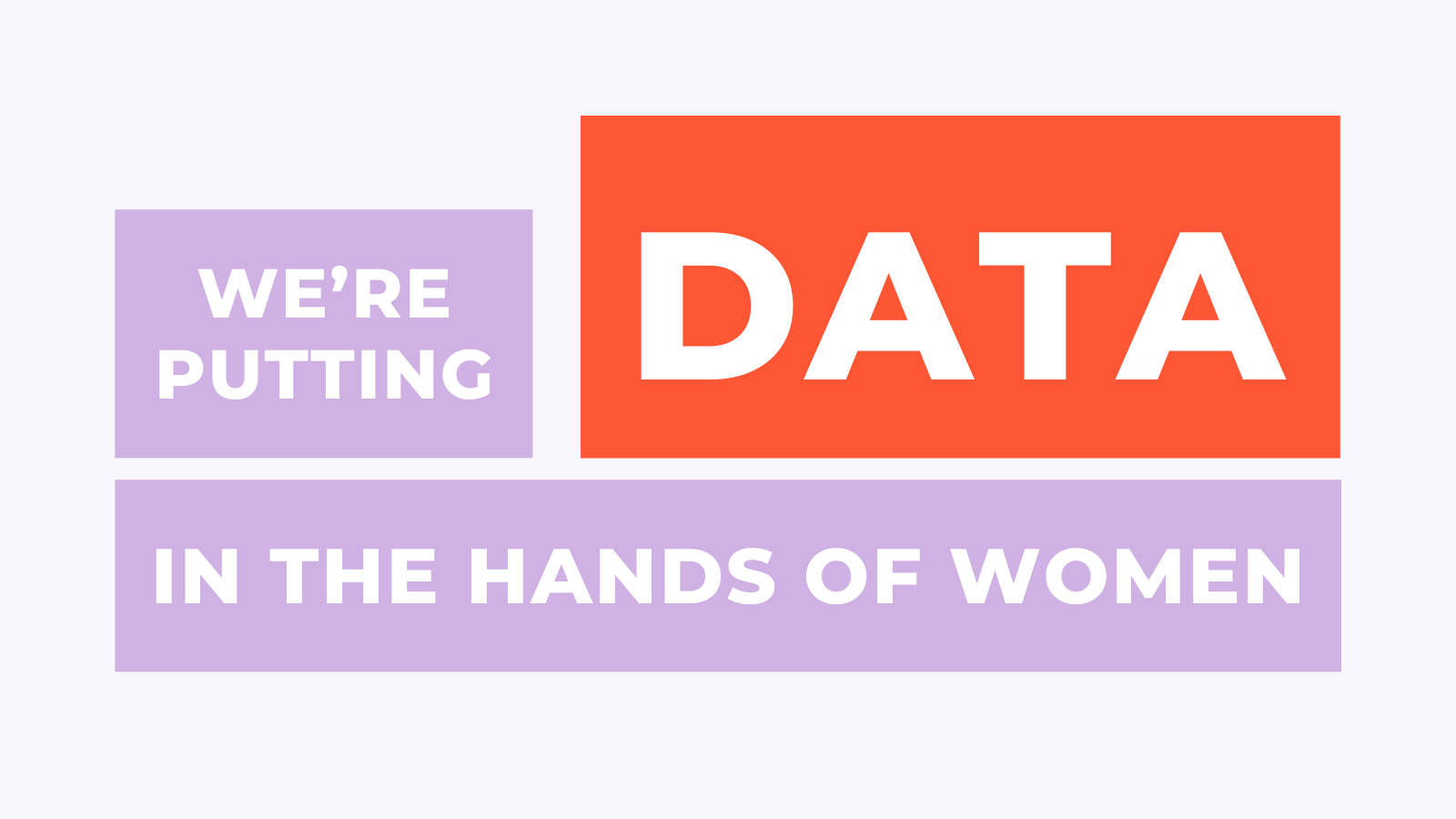 Increase the amount and quality of available gender data

Acknowledging the importance of doing as much as we can with the gender data that does exist, Joanna Pradela, Director of Knowledge Translation and Equality Insights at IWDA, underlined that significant gender data gaps remain, and many aspects of women’s lives are not visible in existing data. Increasing the amount and quality of gender data must also be a key priority:

“The long shadow of gender inequality means that not everything that matters is currently measured.”

Joanna used poverty data as an example: Routine poverty measurement should be able to tell us how many people in poverty are women, in what age groups, whether they have a disability and more. But it can’t. This is because the poverty of a household is measured – one person is surveyed and their answers are taken to be representative of all the individuals who live in that household. But this is problematic. Just because people live in the same house, it does not mean they have the same experiences of poverty and inequality. Measuring the poverty of households not individuals by design hides the ways gender, age, disability or ability status, sexuality, ethnicity or other factors shape and create inequality.

Patriarchal assumptions about what is important are so deeply embedded in our measurement approaches, that the default experience that shows up in data is the male one. This leaves decision-makers and change agents trying to act on gendered poverty without gendered data.

The first step to change is developing an alternative. This has been IWDA’s focus since 2008, working through a number of multi-stakeholder collaborations to develop a world-first, individual measure of multi-dimensional poverty, which IWDA is taking forward as Equality Insights. Data that tells us something meaningful about gendered experiences can disrupt existing narratives and make space for feminist framing of what matters.

IWDA’s data demand is to see a massive investment in individual-level, gender-sensitive poverty data to finally advance the Beijing commitments on gender and poverty. IWDA advocated for this in our leadership position of Action Coalition 6 on Feminist Movements and Women’s Leadership and is very pleased that the blueprint to be unveiled on 30 June includes language on this. 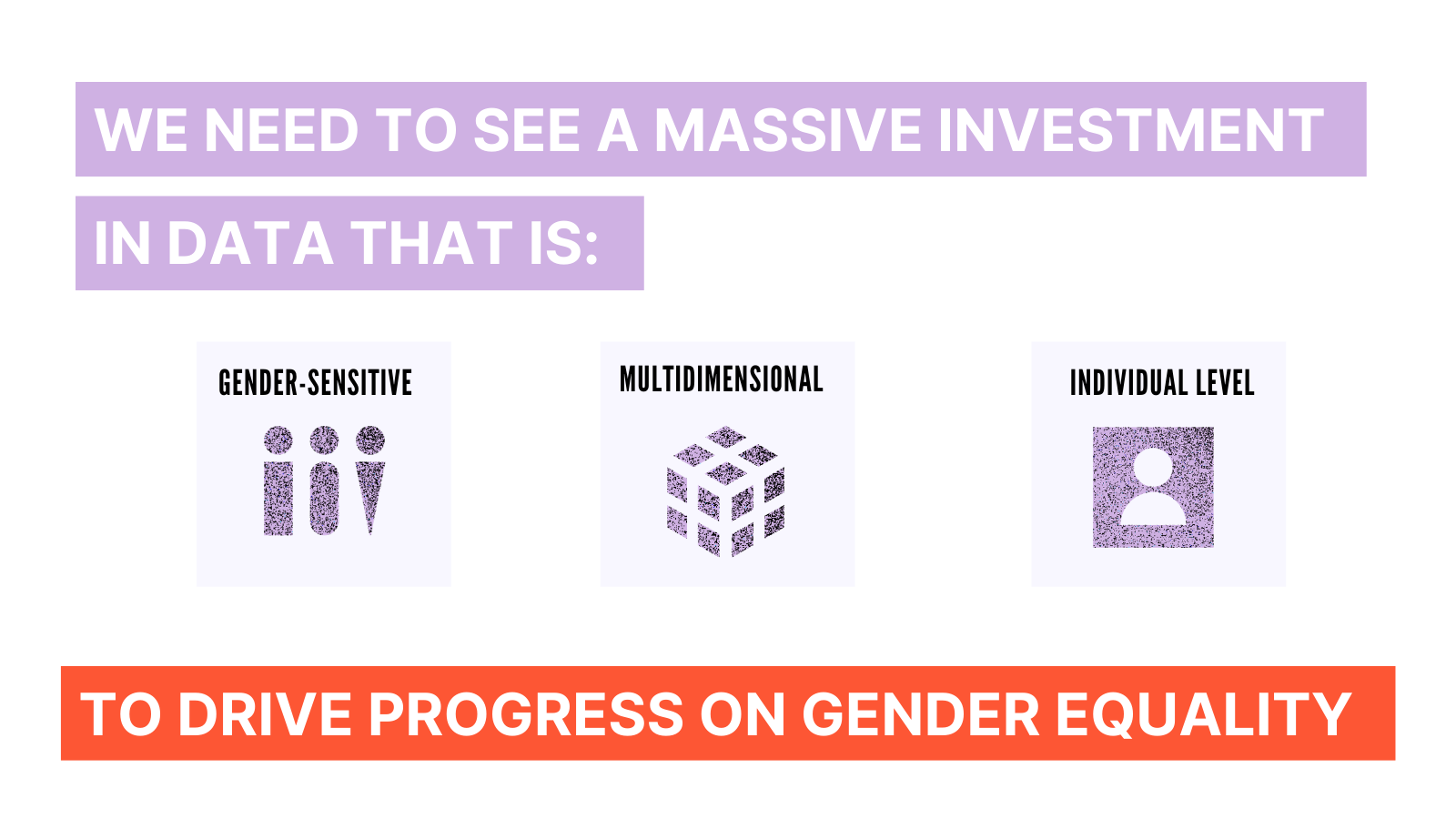 Emily Courey Pryor also highlighted the importance of improving the amount and quality of existing data, as well as collecting new data. Financing gender data is key to bolstering every part of the data system, from collection, to analysis’, to uptake to impact, and to affect change. However, increased awareness of the importance of gender data has not been met with increased financing.

A new report by Data2X and Open Data Watch shows that significant improvement in gender data availability could be made by publishing disaggregated data for indicators that have data but haven’t been disaggregated.

“If all [SDG] indicators for which there were currently any data were published with sex disaggregation, the gender data availability would rise to 85% in Asia and the Pacific, 76% in Latin America and the Caribbean and 60% in Sub-Saharan Africa.”

Financial resources are key to make this work happen. A Data2X demand is for donors to commit USD 500 million per year from now until 2030 to close the gender data funding gap.

Amanda Austin is Head of Policy and Advocacy at Equal Measures 2030, a partnership across global, regional and national advocates to use gender data better to achieve the Sustainable Development Goals. Equal Measures 2030 works with advocates who want to use more data, and have access to evidence that speaks to their lives. This includes supporting gender advocates and feminist organisations to better access gender data. The result is stronger advocates, demanding more and better gender data. Demand from advocates pushes gender data up the political agenda, as a ‘need to know’ issue. 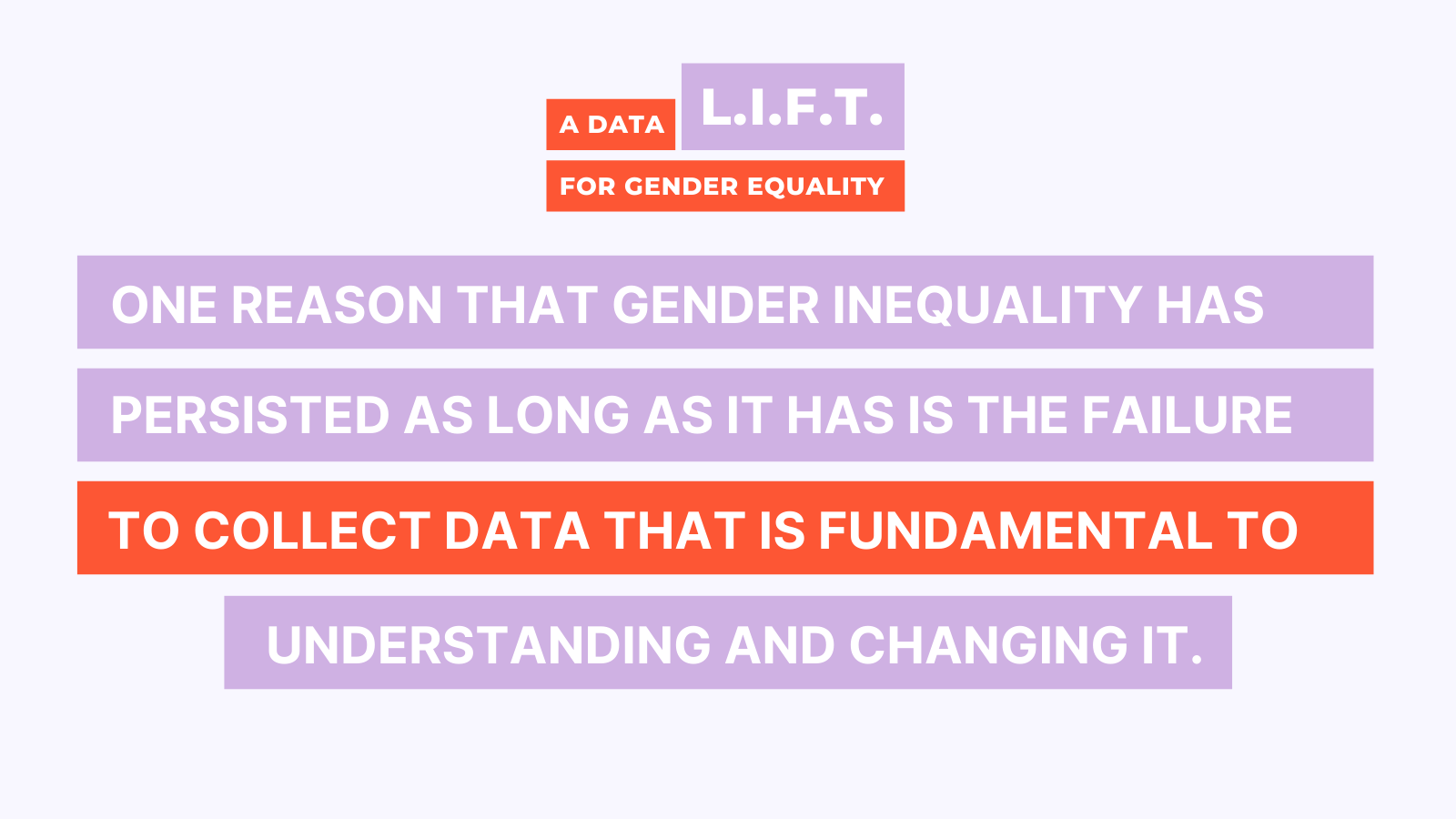 Fridah Githuku reinforced the importance of building political will, because resources without political will won’t lead us anywhere. She spoke about working collaboratively with government, and movement building for change, as mutually supportive.

“Sustaining a mutual and long-term collaboration with the Kenyan National Bureau of Statistics, so that we can influence how they are producing gender data, and what data on what kind of indicators. It is easier to influence when you are inside, and its also easier to sustain the campaign when you are partly part of the system.”

At the same time, GROOTS Kenya is also building the movement of women’s rights organisations supporting gender data, influencing the foundations of statistical capacity, by working with academics and students to strengthen capacity, and engaging with the media to build an enabling ecosystem. It’s about influencing people’s hearts, not just their minds! The results can be seen in more and better gender data products, and improved survey tools.

Fridah’s gender data demands are to see an increase in resources for gender data and to disaggregate outcomes based on gender; donors have power to shape change.

Building from these insights, Joanna Pradela, Equality Insights, reinforced that

“Gender data is political. As political as any other aspect of the struggle for gender equality. Gender data gaps reflect and perpetuate patriarchy and we really need to transform the politics around gender data.”

A key priority is “building a common understanding between change-agents and decision-makers that the costs of the status quo are too high.” These costs have been normalised to the point of invisibility. So we need to make these costs visible. The opportunity costs are real. Money spent on gender unaware data is money that is not supporting gender transformative data.

Like GROOTS Kenya, one way that Equality Insights works to support change is to create opportunities for building relationships of trust between gender equality advocates inside and outside government to advance common goals. 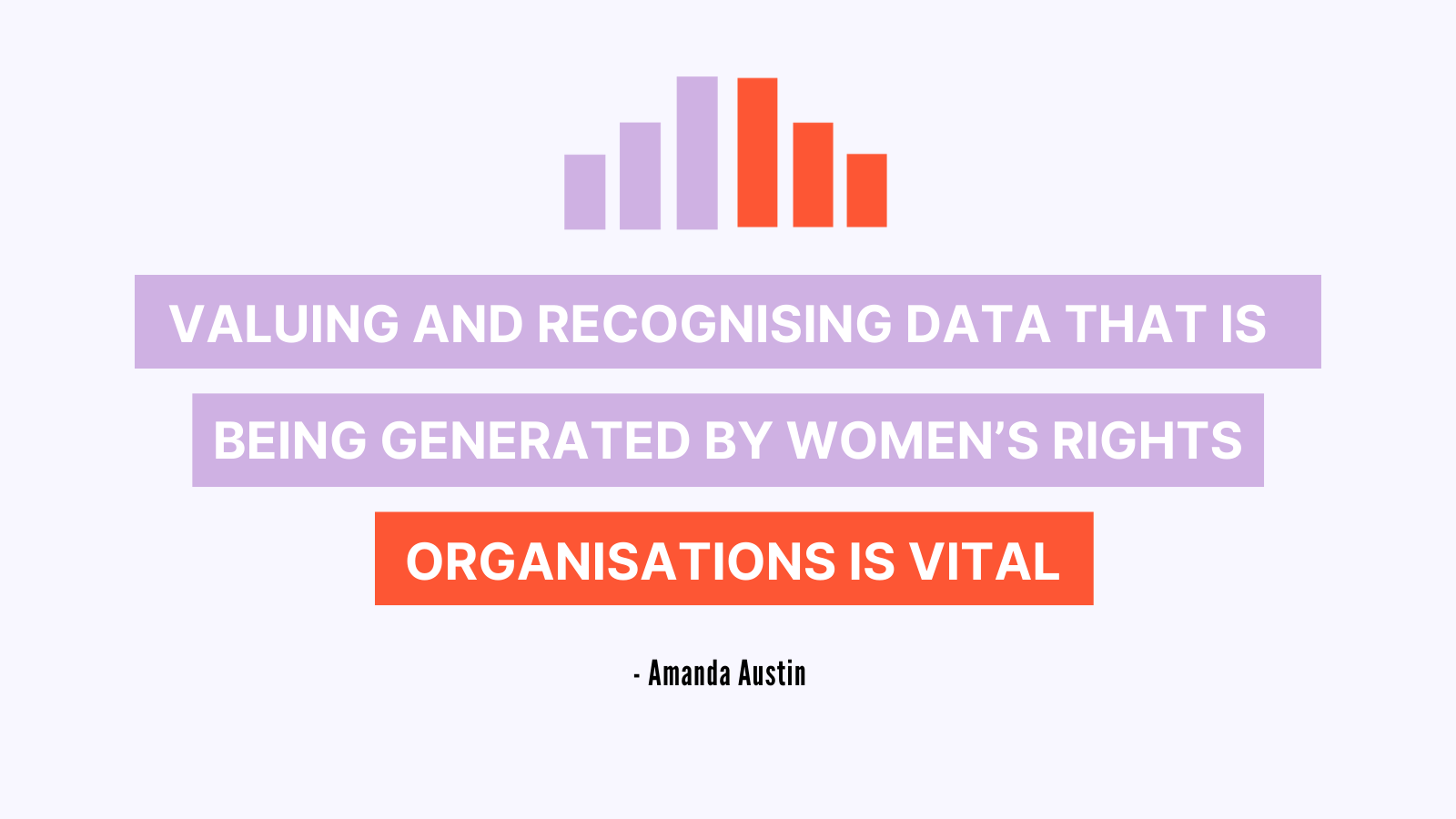 In this context, another of IWDA’s gender data demands is equipping feminist political leaders and feminist movements with the gender data that they need to make gender equality a reality in this generation. We want to see commitments from across stakeholder groups in the Generation Equality forum that evidence-driven action will draw from gender-informed data.

Amanda Austin, underlined that a key part of the transformation must be understanding, valuing and seeking out the voices, knowledge and perspectives of feminist organisations themselves.

“Particularly important is valuing the expertise that can be held by women’s rights organisations working really closely with those populations that are so likely to be hidden or lost in existing data sets, which can include rural women, women and girls living with disabilities, and individuals who are non-binary or gender diverse.”

Resources Shared During the Discussion: