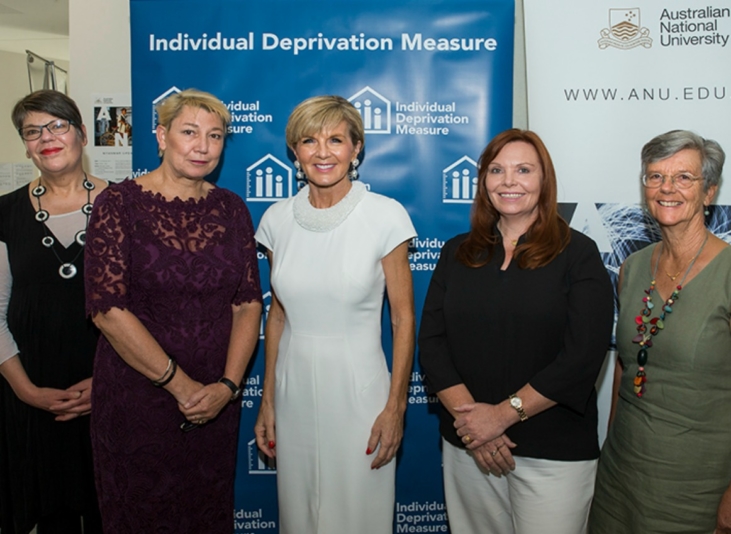 On 15 February 2017, the Minister for Foreign Affairs the Hon Julie Bishop MP, officially announced the program to ready the IDM for global use. Speaking at the opening of the 2017 Australasian Aid Conference (AAC) at the ANU. The Minister outlined the Australian Government’s investment of $9.5 million over four years, as an integral part of Australia’s long-term commitment to closing gender data gaps in the Indo-Pacific region and globally.

The program, a partnership between The Australian National University (ANU), International Women’s Development Agency (IWDA) and the Department of Foreign Affairs and Trade (DFAT), positions Australia at the frontier of poverty measurement.

“It’s important our support has an impact and so I … announce today that the Australian Government is supporting a $9.5 million partnership with the ANU and the International Women’s Development Agency to research and implement a program that analyses the extent of the disadvantage faced by individuals particularly women and girls in these scenarios,” Minister Bishop said. “The result will be the Individual Deprivation Measure, a data tool for policy makers to better target our aid and improve its effectiveness. So congratulations to ANU and International Women’s Development Agency.”

ANU Associate Professor Sharon Bessell from the ANU Crawford School of Public Policy said it was impossible to effectively tackle problems unless they could be understood. For too long, lack of investment in individual data collection has limited the understanding of who experiences poverty and how. “We need more and better data, especially gender data,” Associate Professor Bessell said. “The IDM is the first gender sensitive poverty measure. It is based on the priorities and experiences of both women and men who have lived in poverty, and responds to what matters to them. The IDM is able to help reveal the nature and extent of poverty experienced by women and men – and this matters for developing the policies and services that are necessary to fulfill the global promise to leave no-one behind.”

Joanne Crawford from the International Women’s Development Agency said ignoring intra-household inequality is highly problematic and means global inequality is underestimated. She said the IDM program places Australia at the forefront of efforts to not only improve gender data, but get a better picture of what is happening on the ground, who is benefiting and who is being left behind. “Understanding the nature and depth of poverty experienced by individuals allows us to make strategic choices and prioritise investment where it can make most impact,” Ms Crawford said. “The IDM shows us how particular groups and populations are disadvantaged by intersecting barriers and deprivations. These insights provide the data and evidence to enable more focused policy and action.”

The IDM team also presented a panel at the AAC followed by very engaged discussion,. and IDM social media generated positive global engagement with the IDM throughout the Conference.

Following the launch, the IDM was featured in the Huffington Post and Devex, as one of the 4 take-aways of the AAC; and was  identified by the Asia Foundation as one of the nine highlights of the Conference.

This blog was originally written for the Individual Depravation Measure (IDM), a phase of the program which was a partnership between the ANU and IWDA with strategic funding from the Department of Foreign Affairs and Trade.